2020 has been a somewhat difficult year for many, and life’s been no different for the world’s largest luxury watch brand. The cancellation of the March Baselworld show saw the Rolex new releases 2020 being delayed initially until the end of April as the COVID 19 pandemic started to take hold. As the meteoric spread of the virus and the impact on countries across the globe became more apparent, Rolex reacted by indefinitely postponing their full suite of new releases, and pulling out of Baselworld altogether. Combined with a complete shutdown of the Rolex factory, initially it was thought the Rolex new releases 2020 would be no more. With no firm date being given by Rolex everything pointed to the new releases being carried over to 2021. However, again, taking the industry by surprise the latest announcement from Rolex gives us a 2020 diary date to look forward to. The Rolex new releases will now be paraded in front of the press between 1st- 4th September with Global coordinated launch taking place both online and via several press briefings, the format of which is yet to be communicated.

What are the Rolex New Releases 2020?

Always a closely guarded secret, the Rolex new releases 2020 are no different. There will be a plethora of rumours, predictions and some pure fantasy as to what we can expect, but there are also a series of clues that may indicate what we can expect to see in the release schedule. Here’s our view on potential models to look out for as part of the Rolex new release 2020 schedule, and why we think these models could be the subject of the next big waiting list at your local Authorised Rolex Dealer.

Following on from our previous article discussing the discontinuation of the Rolex Submariner Hulk 116610LV, we fully expect to see the discontinuation of the entire range of Submariners as we know it. That’s not to say that there will be an end to the Rolex Submariner as a collection but expect to see a new range of Submariners across the entire range of metals. The big question here is what changes will Rolex make to arguably it’s most iconic collection. Firstly, the primary motivation to create a new Submariner comes from the rollout of the new calibre 32xx series movement. Having already been implemented in the new GMT-Master II, Yacht-Master, and Datejust collections, the Submariner remains the obvious next collection to benefit from the upgrade, which will see an improved level of accuracy, plus a 70 hour power reserve on the new Submariner models.
After the reintroduction of a Jubilee bracelet to the GMT-Master II, there has been much speculation about this also becoming an option on the Submariner. This however looks like a non starter. The original purpose of the GMT-Master II as a tool watch was to help airline cabin crew track time across several timezones. This area of work lends itself to the more delicate intricacy of the Jubilee link, whereas the depths of the oceans are more suited to the robustness of the Oyster bracelet. We can expect to see a slightly more refined case in keeping with other modernisations of existing models, but the big question being asked is will the Rolex Submariner Hulk be replaced and our previous article goes into greater depth on this. In my opinion the smart move by Rolex would be to discontinue the Hulk entirely, thereby creating another legend in the back catalogue. This could then be followed with a replacement Rolex Submariner anniversary in the 2023 Rolex Releases, the 70th anniversary of the Submariner. For those of you that follow Global Watch Shop on Instagram, here’s a view of what the most popular replacement for the Hulk could be, voted for by Global Watch Shop followers. 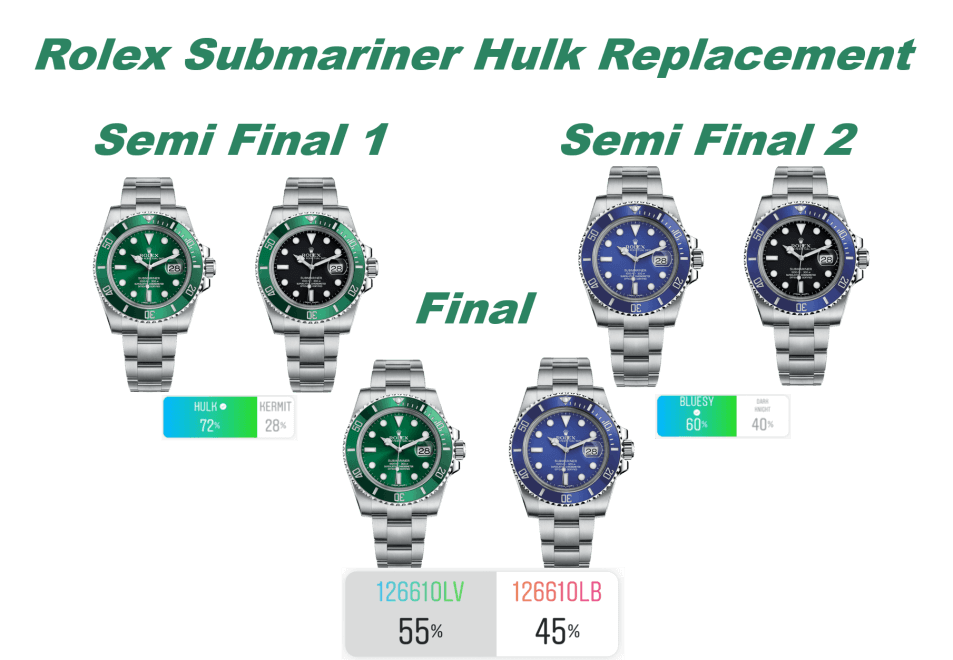 Probably the most underrated watch currently in production by Rolex. The Rolex Explorer II often stands alone as a Rolex sportswatch whilst the heavyweight Daytona, GMT-Master II and Submariner collections take the plaudits. First released in 1971 the Rolex Explorer II’s biggest change came in 2011 when the case size was increased from 40, to 42mm. With 2021 being 10 years since an update, and marking the 50th anniversary of the Explorer II, a well deserved place in the Rolex new releases 2020 should be reserved for the anniversary edition of this collection, allowing the Explorer II to finally take it’s place in the limelight. A September showcase would be perfect timing to allow shops to take stock and start offering the new Rolex Explorer II 50th Anniversary edition in early 2021 As previously predicted the most obvious change would be the addition of a ceramic bezel in alignment with the Daytona upgrade of 2016, but another value added updated would be to produce the launch the Rolex Explorer II as the first stainless steel model to benefit from the addition of an Oysterflex rubber bracelet. A fitting change for those taking on the elements in alignment with the original purpose of the Explorer and Explorer II. 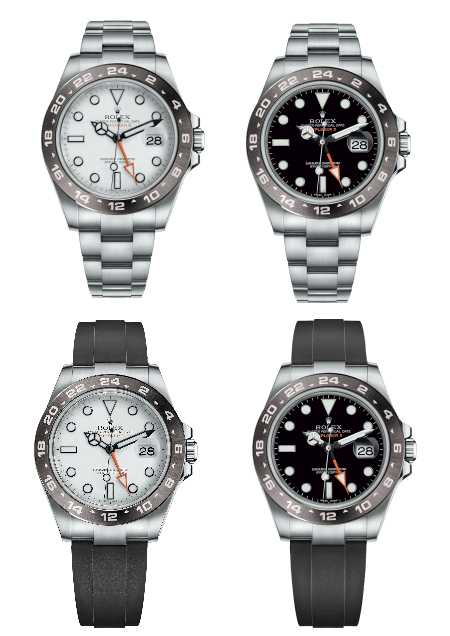 Although the Rolex new releases2020 are due to be showcased in the first week of September, as we’ve seen in previous years, there will be a significant wait before the first of these models hit the shops. The time between the 2019 showcase and model releases was greatly improved from the previous year, but we would still expect a minimum of 6 weeks before seeing the very first of any model, with a slightly more improved availability being seen between December 2020 & January 2021. Having said that the Rolex new releases 2020 will, as ever, be oversubscribed and only those with existing relationships with their Rolex Authorised Dealer, often gained through significant previous spend, being eligible to even be considered for a place on the waiting list. Even those lucky enough to get a place on these golden lists are likely to be in for a lengthy wait with quoted times sure to run into years within days of the releases being announced. We’ll be sure to provide full coverage of the announcements and will look to help facilitate the ownership of these new pieces at the first available opportunity. Be sure to subscribe to our mailing list for all future announcements.

Buying a Rolex on Finance