Who's The New King Of 'Fergie Time'?

One of the most documented of football fables is that of infamous ‘Fergie Time’. According to the Urban Dictionary, the term is defined as ‘any amount of time that a match is played after the said amount of added time’. Up until his departure, it was Sir Alex Ferguson who had been at the brunt of stick from the fans of disgruntled clubs, but how are things now? Which clubs are commanding the most added time now the master has left the field for good? Is it Wenger time? Or is it all about Jose now?

To answer all of the above, we as huge football fans have spent a great deal of time scrutinising official match time data from the Premier League season 2014/2015. We looked at the following:

·       Which referees awarded the most added time?

·       Which team conceded the most goals in extra time?

So which stadiums commanded the most added time last season?

We ranked all of the 20 top flight teams by the amount of added time awarded at their stadiums this season (see the stadium tabs to get the data for this).

According to our findings, the team that were awarded the most injury time at home last season was actually Newcastle, although unfortunately for them, they actually scored the least added time goals. Whether this was down to the Pardew/Carver factor is up for debate, but one that is for certain is the fact they averaged thirty seconds more added time than Louis Van Gaal’s Manchester United and a whopping 57 seconds more than Liverpool. The rest came is as follows: 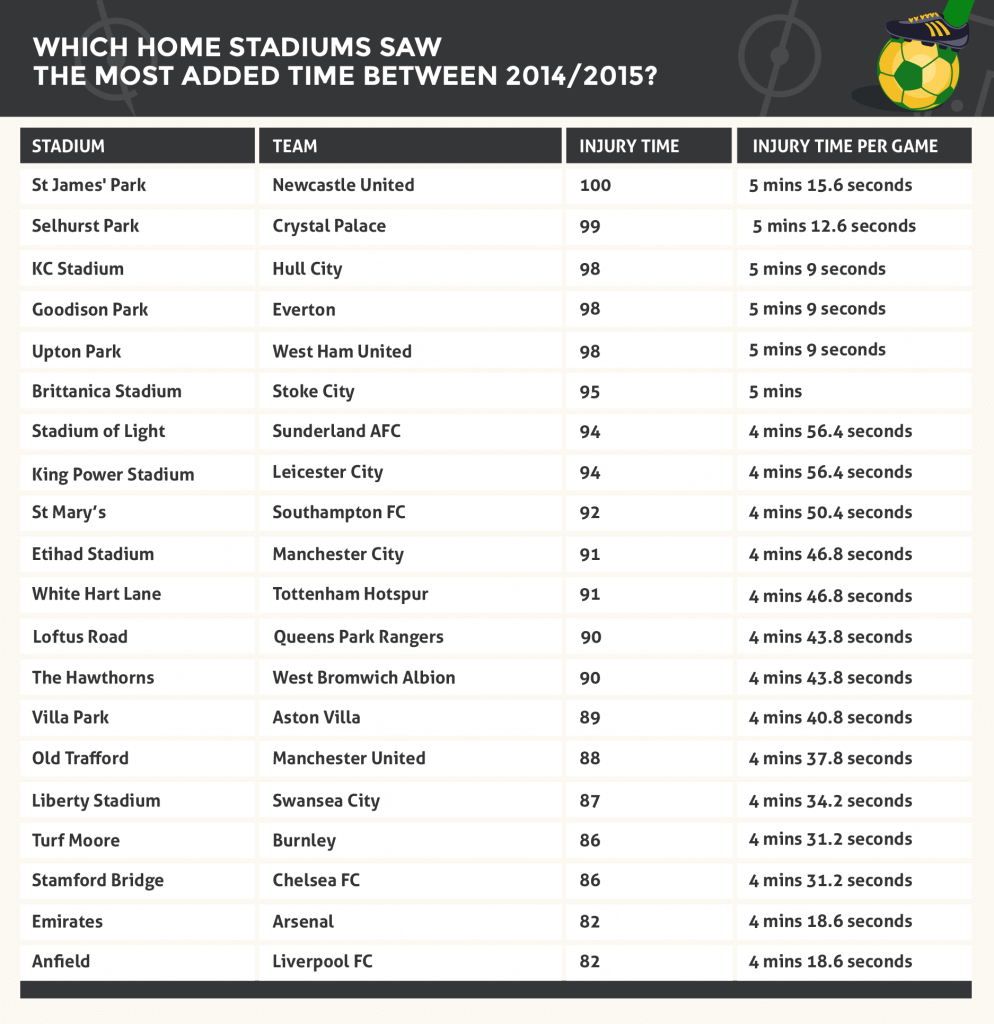 Which teams scored the most goals in added time?

We then wanted to see which plucky poachers had netted the most in extra-time, and the findings were pretty interesting.

Arsenal, Manchester United and Everton make up the top three – trailed by the following:

Which of these top-flight teams actually won the most?

Whilst the goals are well and good, as football fans we know that it’s the result that counts, and so we wanted to uncover which Premier League side actually managed to turn more games around in added time last season. In spite of his public criticisms of Sir Alex about his relationship with the stopwatch over the years - as well as his public spats with a certain ‘Special one’ over key referee decisions - Arsene Wenger’s Arsenal are up there again with the most added-time wins, along with Stoke, Everton and Tottenham.

Which teams managed to gain additional points in extra-time?

What is pretty interesting here is that we are seeing the usual suspects. Arsenal, Everton, Stoke, Manchester United, Tottenham and Stoke all managed to secure an additional three points in added time. Poor old Jose is right at the bottom in this case. Whether or not Mark Hughes picked up a thing or two from his old mentor over the years is anybody’s guess, but one thing we do know is that Jose finished bottom when it comes to added-time wins last year – is he losing his touch?

Which teams secured the most draws in added time?

Although it’s no three points, in many games a draw will suffice, and we decided to look into which teams manage to gain draw after 90 minutes through scoring in injury-time – and the teams are starting to look a little familiar:

Which players managed to net the most in added time?

The top two last minute poachers were Oliver Giroud and Tottenham’s Harry Kane – no coincidence that both are the front men for certain North London rival clubs.

Who had holes in their net?

Poor Newcastle are up there again with the most conceded goals in added time, followed by QPR, Crystal Palace and West Ham it seems are blowing as many games as they are bubbles!

Which referees awarded the most injury time?

Last but not least, we had a close look into which referees had kept their watches ticking for longest last season, and interestingly Gloucestershire born Lee Probert tops the list when it comes to the average amount of added time (6 minutes per game), followed by Preston based referee Neil Swarbrick with five minutes 2.4 seconds. In terms of total additional time for the season, infamous Martin Atkinson awarded a cramp-inducing 149 minutes.

So what does all this mean? Is there a conspiracy by certain referees, or against certain clubs? Give us your view in the comments below, we’d love to hear them.

Buying a Rolex on Finance